Dear Mayor Cohn and Members of the City Council:

Residents of Rye reached out to me to obtain my expertise in assessing the validity of the articles and letters provided by Stantec Design Services, regarding the health risks of installing artificial turf at what is now Nursery Field.   I am providing this information pro bono because our nonprofit research center is very concerned about the misleading information that has been presented to Rye officials regarding artificial turf.

The purpose of this letter is to focus on the research literature summarized and presented in Stantec’s review, including those in their Appendix.  It will not be focused on the logistical issues, but rather the health issues of importance to children using the field, and those who would be exposed to the chemicals in artificial turf because of its location near homes, wetlands, and a main tributary to Long Island Sound.

I will focus first on the claims that artificial turf does not cause cancer.  Dr. Archie Bleyer, quoted by Stantec, has impressive credentials, but his conclusions are based on his expertise regarding decades-old research while ignoring many of the most recent published studies.  Most important, as city officials, it is essential to distinguish between the lack of conclusive research linking artificial turf to cancer, and the often-made claim by the turf industry that artificial turf does not cause cancer.  The lack of conclusive proof of danger is not equal to proof of safety.  It is widely known that artificial turf contains chemicals that are probable and known carcinogens.   However, it takes years for cancer to develop after exposure to carcinogens.  For example, most smokers start smoking as teenagers but they don’t develop lung cancer for at least 3-4 decades. The reports of cancer clusters, such as the one among soccer players in Washington state, are the first hint that exposure to the chemicals contained in artificial turf increase the risk of cancer, but this too takes years to conclusively determine whether the cancer risk is higher due to the exposure.  That is one of the reasons why cancer clusters, such as the one reported in Washington State, can rarely determine causality.  It reminds me of cancer clusters among Vietnam veterans exposed to Agent Orange that were considered just a fluke until years later, when researchers concluded that Agent Orange caused certain types of cancer.  While we wait for this research, we cannot accurately conclude that there is no risk. Instead, we can only state that we do not know the level of risk.

Equally important, cancer is not the only health risk associated with the use of artificial turf.  The rubber pieces break down into very small pieces called particulate matter, which are kicked up into the air when the field is used where they can be inhaled.  The particulate matter can aggravate asthma, and can contain irritants and heavy metals.  The research cited by Stantec ignores that serious issue.

In addition, as the field gets hot, which can be 50-80 degrees hotter than the air or natural grass, the heat can cause heat stroke and even cause burns.  The highest temperature we have tested on a summer day in the 90’s was over 180 degrees.  In addition, heat from the fields makes it more likely that the chemicals are released into the air.  These can include polycyclic aromatic hydrocarbons (PAHs), and endocrine disruptors such as phthalates. These exposures can contribute to obesity, early puberty, ADHD, and eventually cancer.  Children are more vulnerable to these exposures than adults.

The Massachusetts HHS letter from 2015 and the letter from the State of Connecticut from 2015 both attempt to summarize information that focuses on cancer data but is broader than the cancer risk of artificial turf.  However, the studies quoted in the letter are small and so their generalizability to other fields is limited.  Importantly, it excluded several studies that raised concerns about the risks posed by artificial turf and pre-dates several more recent studies that have raised serious health concerns.

This year, testing in several communities found dangerous levels of lead in artificial turf as well as playgrounds made from synthetic rubber.  For example, testing of playgrounds and artificial turf fields in affluent and lower-income communities in Washington, D.C. resulted in more than 2 dozen that were closed due to health risks (see signs below). 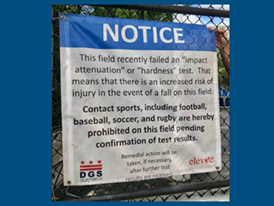 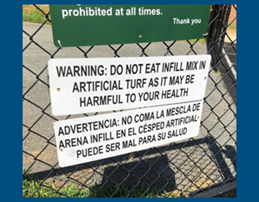 In the below left photo, children are playing on an artificial turf field near their school; tire crumb infill that had been hidden in the plastic grass came to the surface due to rain and wind. 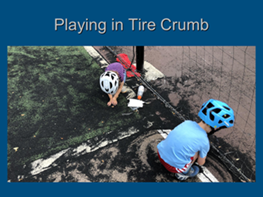 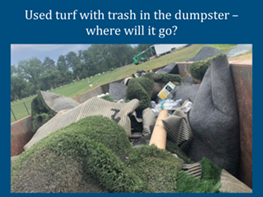 The environmental implications of artificial turf are also important.  In the above right photo, you can see old turf has been dumped in a dumpster with trash. Much of the infill has already spread to the nearby playground, grass, and stream.

I will now focus on just a few of the studies that were not discussed in the letters submitted by Stantec, all of which demonstrate the very serious, evidence-based concerns about health risks, in chronological order:

Shalat 2011 (for the New Jersey Department of Environmental Protection) – They analyzed lead and other metals in particulate matter (dust) that is kicked up into the air by activity on the field, and thus, able to be inhaled, on 5 artificial turf fields.  The study found that there was more inhalable particulate matter in the air around a moving object (either a robot or a child soccer player) than a stationary collection system on the side of the field.  This suggests that studies using stationary collection systems underestimate exposures.  It also suggests that even low levels of activity on the field can cause inhalable particulate matter to get into the air where it can be harmful.  The study also found that the oldest field studied (8 years old) had more inhalable particulate matter than younger fields in this study (1–3 years old).  This is especially worrisome because the dust contains lead.  The authors state, “While it is not possible to draw broad conclusions from this limited sample of fields, the results suggest that there is a potential for inhalable lead to be present on turf fields that have significant amounts of lead present as detectable by surface wipes.  It also would appear likely from this sample that if the lead is present to any appreciable extent in the wipes it will likely be present in the breathing zone of players who are active on these fields, and that furthermore, these levels potentially exceed ambient EPA standards.”  Since no level of lead exposure is considered safe for children, “only a comprehensive mandated testing of fields can provide assurance that no health hazard on these fields exists from lead or other metals used in their construction and maintenance.”[1]

Llompart et al 2013 (Universidad de Santiago de Compostela) – This study examined samples from 9 playgrounds and 7 newly purchased rubber floor tiles that were made from recycled tire rubber in Spain.  It found all samples released hazardous chemicals into the air, where they can be inhaled, some of which were at high or very high levels. PAHs were found in all samples, including the carcinogenic B[a]P.  Other chemicals of concern include the phthalates DEP, DIBP, DBP, DEHP, and BHT.  The authors conclude, “The present study highlights the presence of a high number of harmful compounds, frequently at high or extremely high levels, in these recycled rubber materials.  Therefore, they should be carefully controlled, and their final use should be restricted or even prohibited in some cases.”[2]

Marsili et al 2014 (Siena University) – This study evaluated the recycled rubber infill (4 samples were not yet installed and 4 from fields that were 1-8 years old) and 1 new sample from virgin rubber in Italy. It found that levels of cadmium and zinc exceeded regulatory requirements for some or all samples, respectively. It also found very high levels of PAHs released into the air from some samples. After calculating a risk assessment for PAH inhalation from synthetic fields, the authors stated that “the quantity of toxic substances it releases when heated does not make it safe for public health.”[3]

Canepari et al 2016 (Sapienza University of Rome) – This study examined particulate matter and extractable chemicals from 1 sample of recycled tire rubber, 2 new and a single 7-year-old sample of natural rubber, and 1 sample of last-generation thermoplastic elastomer crumb (TPE).  The recycled tire rubber had a larger concentration of toxic elements, such as heavy metals.  TPE released the lowest amount of elements with high concentrations of only magnesium and calcium.  Natural rubber was more sensitive to aging and more easily broke down into small pieces that could be inhaled.  The authors concluded, “The use of natural rubber and of not-recycled thermoplastic materials, which are progressively replacing recycled tire scraps as synthetic turf fillers, does not seem to be adequately safe for human health, particularly when considering that children are the most exposed bracket of population.  Exposure risks arising from the use of these materials deserve to be further deepened.”[4]

Celeiro et al 2018 (Universidad de Santiago de Compostela) – This study evaluated the amount of chemicals released into the air from samples of recycled tire rubber infill from 15 soccer fields in Spain.  Analysis found high levels of PAHs, including the highly toxic B[a]P.  The levels of PAHs exceeded REACH Regulations for consumer products.  The study also found heavy metals such as cadmium, chromium and lead, as well as phthalates, adipates, vulcanizing agents and antioxidants could leach into runoff. “The environmental and health risks derived from the use of these surfaces have to be considered and some regulations should be adopted.”[5]

Benoit and Demars 2018 (Yale University) – This study analyzed 9 bags of recycled tire mulch from chain stores and 6 samples of recycled tire infill for athletic fields.  It focused on the chemicals which people using the fields would be expected to be exposed to, and found 92 chemical compounds.  Only about half of these compounds have been tested for effects on human health, of which 9 are carcinogens and 20 are irritants.  They concluded, “But what is known is that people routinely ingest, inhale, handle, and have abrasions which contact ground tire material.  That being so, it is prudent to assume that any chemicals in the tires or released by them can be transferred to exposed individuals.  This study shows that a large number of compounds, many of them carcinogenic or irritants, are released from shredded recycled tires through several potential routes.  Caution would argue against use of these materials where human exposure is likely, and this is especially true for playgrounds and athletic playing fields where young people may be affected.”[6]

Perkins et al 2019 (Yale University) – Based on previously published research, the researchers identified 306 chemicals found in crumb rubber. Fifty-two of these chemicals were classified as carcinogens by the U.S. EPA and/or the European ECHA. Then the researchers used the known characteristics of each chemical, such as the structure, to predict whether or not it was likely to be a carcinogen. Using this process, 197 were predicted to be carcinogens. They concluded, “Our study highlights a vacuum in our knowledge about the carcinogenic properties of many chemicals in crumb rubber infill.”  “The crumb rubber infill of artificial turf fields contains or emits chemicals that can affect human physiology.”[7]

The bottom line:  There is a growing body of evidence of the risks of the chemicals and lead in artificial turf and rubber surface playgrounds.  It would not be ethical to intentionally expose children to these play areas, and no independent researchers or government researchers have conducted long-term studies to determine if children with greater exposures are more likely to develop the health problems that are expected, such as obesity, asthma, cognitive damage, early puberty, and eventually cancer.