Amy Reed, MD, PhD, an anesthesiologist whose laparoscopic hysterectomy in October 2013 called into question the safety of power morcellation, died Wednesday, May 24, at 44 years of age from uterine cancer.

Dr Reed, a mother of six, underwent the hysterectomy at Brigham and Women’s Hospital in Boston, Massachusetts, to remove fibroid tumors. Power morcellation, intended to shred uterine tissue for removal through a laparoscopic incision, dispersed and upstaged an undiagnosed uterine leiomyosarcoma inside her abdomen.

While she battled through a series of surgeries and procedures, Dr Reed joined her husband, Hooman Noorchashm, MD, PhD, in a high-profile campaign to ban the use of the devices during gynecologic procedures and bolster oversight of all medical devices by the US Food and Drug Administration (FDA). The couple pressed for government investigations and legislation, coauthored articles, testified before the FDA, and shone a spotlight on women who had died after morcellation-upstaged occult uterine cancer. […] 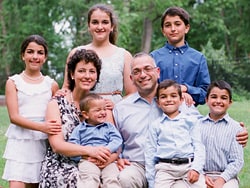 Diana Zuckerman, PhD, president of the National Center for Health Research, recalled the impression Dr Reed made when the think tank honored her and Dr Noorchashm at an awards luncheon in 2015.

“She spoke without apparent anger or bitterness about what happened to her, which amazed me,” Dr Zuckerman told Medscape Medical News. “I can’t tell you what an impressive, gracious, wonderful woman she (was).”

Determined to Beat the Odds

Dr Reed earned a PhD in immunology at the University of Pennsylvania and then an MD in 2005 from the institution’s Perelman School of Medicine. She followed up with a postdoctoral fellowship in transplant immunology before completing her residency training in anesthesiology and a critical care fellowship at the Hospital of the University of Pennsylvania.

In 2011, Dr Reed joined the Department of Anesthesia, Critical Care and Pain Medicine at Beth Israel Deaconess Medical Center in Boston. It was there that Dr Reed treated victims of the 2013 Boston Marathon bombing along with the surviving bomber, Dzhokhar Tsarnaev.

She married Dr Noorchashm in 2001 and had the first three of their six children by the time she finished medical school. Their togetherness extended to research. They were coauthors of five published studies on immunology — Dr Noorchashm holds a PhD in that field, too.

In October 2013, about a year after the birth of their sixth child, Dr Reed had a hysterectomy to remove bothersome, but supposedly benign, uterine fibroids. She and Dr Noorchashm say her doctors recommended a laparoscopic as opposed to an open-field operation, but did not mention the use of a power morcellator.

Shortly after the operation, Dr Reed learned that she had a uterine leiomyosarcoma and that morcellation had advanced it to stage IV. She underwent cytoreduction and hypothermic intraperiotoneal chemotherapy followed by six rounds of systemic chemotherapy. MRI and CT scans indicated she was cancer free.

She and her family moved from Needham, Massachusetts, to Yardley, Pennsylvania, and by the end of 2014, she had recovered well enough to start working part time at the Hospital of the University of Pennsylvania. However, the leiomyosarcoma still lurked in her body, requiring a surgery to remove a tumor behind her left kidney in February 2015, with radiation treatment afterwards. More metastasis and more procedures, some experimental, followed.

“We all knew the odds were against her,” said Dr Zuckerman, “but Hooman and Amy were both determined to beat the odds. They made it seem possible.”

The end almost came in April when Dr Reed went into pulseless electrical activity cardiac arrest. As Dr Noorchashm described it in an email to media outlets, an inoperable abdominal tumor of hers bled internally and enlarged, pressing against the vena cava and cutting off blood return to the heart. Dr Reed’s heart recovered after the tumor ruptured.

Dr Reed remained hospitalized until May 19, when she was discharged to go home and receive hospice care, Dr Noorchashm said in an email announcement that resembled a eulogy.

He wrote that what mattered to Dr Reed more than dying “is how we live, what we choose to think about, learn and do, the magnitude of our commitments and focus, who our friends are and what mandates of ethics and integrity guide us…in this life.

“Those are the principles by which Amy has lived a life of passion, accomplishment and love for all those she’s touched.”

In an interview with Medscape Medical News in 2015, Dr Reed described how she dealt with her children’s anxiety about her health.

“They ask you questions like, ‘Are you going to die?’ ” Dr Reed said. “I say, ‘Well, everybody dies. I feel okay today.’

“You don’t go down all those horrible, what-if pathways with the kids. And I don’t think we should do that as adults.

“Look at what’s in front of you today.”